This piece is a short intro to a series of posts on wealth inequality and economic opportunity in Canada. More will follow later this week.

Last week, my friend Sean Speer and I took on Linda McQuaig and Armine Yalnizyan in a television debate, produced by Wodek Szemberg and moderated by Steve Paikin, for The Agenda on TVO. It was fun. If you grew up in Ontario in the 70s, 80s, or 90s, you started out watching The Polka-Dot Door, then one day you’re watching The Agenda and it occurs to you that you’re an adult. Life goes Polkaroo-to-Paikin. All that is to say: I was happy to be on TVO.

The proposition we debated was “should we tax billionaires out of existence?”

It was an intentionally provocative question (because TV debates are otherwise no fun) and I had initially agreed to participate out of a sense that it might be fun to argue something that seems utterly indefensible these days: billionaires are fine, and we shouldn’t be too bothered by them. I was pretty sure there was no way for our side to win, but where’s the fun in being Apollo Creed when you can be Rocky Balboa? Take the underdog spot and make the most of it.

I’m not an economist (which should be readily apparent if you watch the debate), but I do have some scientific training and have worked pretty extensively with data. When I set out to understand this obsession with billionaires and wealth inequality, it was from a perspective that I think many people share: inequality is a growing problem, and there’s a general sense that it’s either getting much worse, or is already worse than ever, or both.

When you go beyond the clickbait headlines, though, the picture of wealth and inequality in Canada looks very different from the narrative. In fact, as Brett House pointed out in an earlier TVO panel, much of what we think of inequality in Canada is actually the American story. Below is just a quick take that I’ll expand on in a later blog post.

You might think that billionaires with too much wealth are a significant driver of wealth inequality in Canada. I didn’t know what the answer was, so I went and looked and here’s what I found: not only are billionaires a tiny fraction, but almost every Canadian who owned real estate in the past 15 years has done better than the billionaires.

This is the Statistics Canada figure for total national wealth (from here). 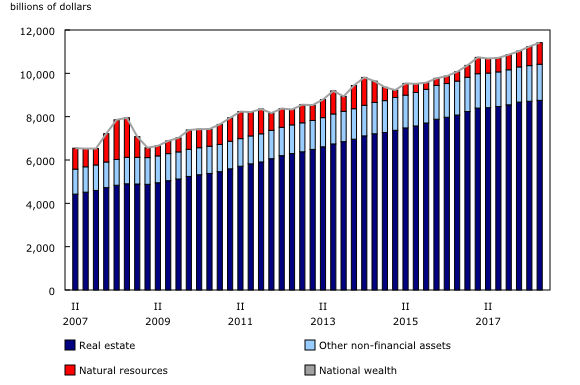 I took the same data, added the total wealth of all Canadian billionaires from the Forbes Billionaires List – the same reference source we used for our debate – and replotted the bar chart. (I interpolated from 2015 to 2018 to get the 2016 and 2017 values, because they weren’t in the data file I had.)

Seriously: billionaire wealth is in that bar chart. Squint hard and look for the blue at the bottom.

In 2007, the total wealth of all Canadians on the Forbes list was $110 billion Canadian dollars. In 2018, it was $194 billion. The net value of all real estate in Canada grew faster than the sum of all Canadian billionaires’ wealth. I am not making this up. The data are public. You can check.

On the whole, established Canadian billionaires would be richer if they’d just invested in real estate around 2007 instead of owning large, complex, difficult-to-manage companies. That is crazy. (In contrast, US billionaire wealth has dramatically outperformed real estate over the same time frame.)

Do we have a problem with wealth inequality in Canada? Maybe we do. Thanks to the fastest and most persistent rise in house prices in Canadian history, there are now a couple million millionaires in Canada.

If you’re going to redress wealth inequality in Canada, the numbers paint a clear picture: the overwhelming bulk of wealth is in the houses, pensions, and savings of ordinary Canadians. If you somehow took every penny from every billionaire, you wouldn’t even make a dent in wealth inequality. This is obvious when you even just look at the numbers. In Canada, there are about fifty thousand millionaires for every billionaire. To paraphrase a famous politician, the problem with making billionaires pay is that you very quickly run out of billionaires’ money.

The proposals on the table in the US Democratic Party’s leadership contest – 3% or 7% wealth taxes – would sting billionaires, no doubt, but wouldn’t eliminate them. More than that, you can’t just take money from billionaires, because their wealth is only very rarely in any kind of liquid form: billionaires own companies. In a democratic society, one can only become a billionaire by starting or co-owning a very, very successful company, or by inheriting one. There’s really no other way.

To tax them out of existence, then, the government can’t just force billionaires to pay taxes, because their wealth is tied up in companies, which are made up of people, assets, buildings, intellectual property, customers, value chains, etc.

The government then has only two options: force billionaires to sell their companies to other companies – at a steep discount, because the sale is forced – or seize and control the companies. (I can’t see any other way this would work, but I’m all ears if you have another solution.)

It’s here that we come to the crux of the inequality debate. Behind the slogans and clickbait (“every billionaire is a policy failure”) we’re not just talking about billionaires, but rather a much more radical, aggressive agenda for economic redistribution.

You can go and read the proposals of Thomas Piketty, one of the most popular social scientists working on the subject of inequality, to see what’s really being suggested. Piketty’s latest book, Capital & Ideology, addresses what tax rates should be in order to achieve his idea of economic justice. Excerpts of his book are here.

I’m going to spoil it for you.

Under Piketty’s proposed tax regime, billionaires would pay a marginal wealth tax rate of 99% – 90% wealth tax and 90% inheritance tax (on whatever is left after the wealth tax).

It’s not just billionaires, of course. Let’s say you work for your whole life, build a nest egg, invest what you earn, maybe even build and sell a business, and manage to save two or three or five million dollars. You’re pretty far from owning a yacht (you could barely afford a house in Toronto or Vancouver). Your marginal tax rate under the Piketty regime would be 2% of your net wealth every year and inheritance tax somewhere around 50% or 60% of your total wealth.

We should have progressive taxation, and we should close the tax loopholes that allow a few very wealthy people to pay lower effective tax rates than average Canadians. We should have a welfare state. We should have a decent minimum wage and a decent public education system. In Canada, we’ve managed most of these things already, and we can reasonably debate whether to raise or lower taxes or social benefits. We haven’t had to eliminate billionaires to achieve any of the generous welfare state that we enjoy and to which many now feel entitled. I haven’t even addressed the notion of whether a society that enables people to become billionaires is in fact better or wealthier than one that doesn’t. (Spoiler: it is. More on that later.)

Are we ready, then, to go down this road of “first, let’s get all the billionaires?” Several horrifying examples in the twentieth century showed us what can happen when someone wins the argument, in Piketty’s words, that “only a vast collective experiment… can allow us to make progress in this direction…. to move beyond capitalism and private property and put in place a participative socialism.”

Be careful what you wish for. You just might get it.